For some odd reason, Zimmerman’s defense released all this info…

I’m guessing the more info Zimmerman’s defense team releases, the more messaging they feel they can control? I’m not quite sure but nothing from the above link is flattering and/or helps their client’s cause.

So, I’ll start with the lies and discrepancies seen in Zimmerman’s video reenactment — it can be accessed here:

I’ll eventually get to the lies and discrepancies from Zimmerman’s interviews and statements. I’ll keep the comment section of this posting open but please try to cite only lies/discrepancies with Zimmerman’s video reenactment, interviews, statements, etc. If you’d like to comment on something else, the following blog posting is wide open!

1) Zimmerman’s not able to effectively explain how nearly all the crime scene evidence and Trayvon’s dead body ended up so far south of the T. You can clearly see the investigators wanted this answer but instead Zimmerman starts walking south and “can’t remember” how he ended up where he did south of the T.

“I think I stumbled and I fell down.”

“I think I was trying to push him away from me.”

Of course, unless Zimmerman was “attacked” from the north (he stated Trayvon supposedly came from the south behind some bushes), there was no reason for Zimmerman to have ever been an inch south of the T.

Note: I assume Zimmerman recants the bushes comment from his initial report since he conveniently “didn’t see exactly where he (Trayvon) came from” during the reenactment video.

2) Zimmerman tries to show investigators that his scuffle with Trayvon Martin occurred behind 1211 Twin Tree Lane. The correct location was one house further south behind 1221 Twin Tree Lane.

Why short change how far he and the unarmed teen were from the T? Because, as mentioned above, Zimmerman had about 24 hours and I assume a few conversations with his father (a retired judge) to figure out he shouldn’t have been even an inch south of the T if he was simply returning to his vehicle when attacked from behind. Meaning, the closer to the T, the better for Zimmerman’s defense. 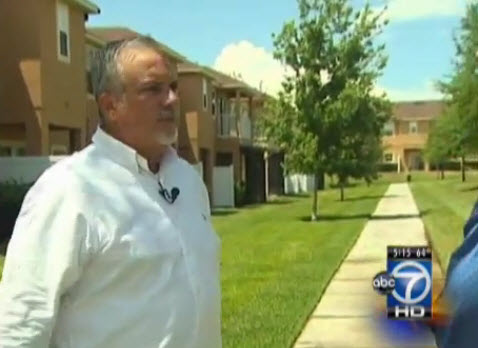 4) After Zimmerman’s 911 call ended minutes before, he should have been back in his Honda Ridgeline waiting for police as instructed — so, not anywhere near the T — when he was attacked.

Per Zimmerman’s video reenactment, let’s dissect his version of the happenings via a map (of course) and note some more discrepancies… 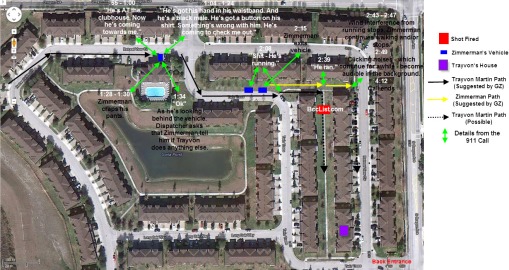 5) The non emergency dispatcher asked Zimmerman to report any other suspicious activity around the 1:34 mark of his call to police. If we believe anything Zimmerman has said – that’s been extremely tough so far during this entire case – he supposedly started following (or stalking, harassing, and preying upon) Trayvon Martin in his vehicle at this point. So, to reiterate, Zimmerman wouldn’t have moved his vehicle supposedly parked on the north side of the clubhouse at any point before the 1:34 mark of his call since he was giving a play-by-play of Trayvon’s front side and wasn’t asked to keep an eye on the unarmed teenager.

It would have taken Trayvon (almost exactly) 60 seconds to walk from where Zimmerman’s car was supposedly parked on the north side of the clubhouse to where he supposedly starts running (per Zimmerman’s call/reenactment). So, if Zimmerman left his parking spot at the 1:34 mark of his call – Note: I don’t hear anything that proves the car was in gear/following Trayvon – he would have seen Trayvon starting to run around 60 seconds later or around the 2:34 mark of his call.

When did Zimmerman first report seeing Trayvon run? The 2:08 mark of his call to police…about 34 seconds into Trayvon’s walk and his supposed vehicular pursuit.

– 34 seconds (the math from Zimmerman’s call)

6) Frank Taafee stated Zimmerman’s truck was parked facing west when he got out to pursue Trayvon (so, not east as Zimmerman indicated during his reenactment)… 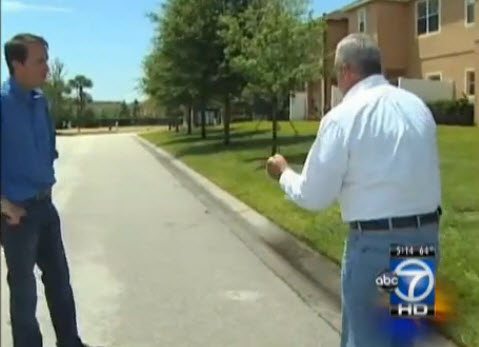 Given 2) and 6) above, I assume O’Mara is going to have to trash Taaffe since the reenactments Zimmerman and he gave don’t even remotely coordinate. Given Taaffe’s nature, that may not play out too well for the defense.

7) MOST DAMNING: At the 6:09 mark of his reenactment video, Zimmerman stated Trayvon circled his eastward facing truck sometime after the teen took off behind the houses. So, this reappearance of Trayvon would have been after the 2:08 mark of Zimmerman’s call to police. Without being said, after Zimmerman sees Trayvon run at the 2:08 mark of his call, he never mentions him reappearing.

I’m not sure as to the significance of this fabricated story but I didn’t include Trayvon circling Zimmerman’s car in his reenactment map because it’s literally impossible and a flat out lie.