I’m ULTRA impressed by the below follow-up from LivingSocial. Not because of the follow-up itself, but, because…

a) the thoroughness/research taken (see below).

b) the conciseness/effectiveness of the messaging.

c) the inclusion of an apology. I didn’t demand, expect, or need one but it’s shocking/refreshing to see any company, politician, public figure, human, etc, etc, etc mention fault and apologize.

d) the deal being shut down.

To: thelist@bcclist.com (nice research! This is my blog’s generic inbox…address listed on the mainpage.)

We caught your blog post (nice customization!), and we’re hoping to reach out to you about our mistake. We apologize that our recent deal offering for Action Impact was offensive.

In running this offer, our intent was not to offend our customers or to minimize the unfortunate events that recently took place in Arizona. We greatly respect and value our customers, and as such, we have shut down this deal.

Again, we offer a humble apology and ensure you that we will give additional consideration in moving forward with the types of deals we select and when (my originally noted concern!) they are offered.

Update 1: It seems that the deal hasn’t been scrubbed from LivingSocial (yet). I wonder if marking it as Sold Out means – as Sara mentioned – the deal was shut down. Regardless, the crude imagery still exists on LivingSocial less than one week after 6 people were murdered in AZ. 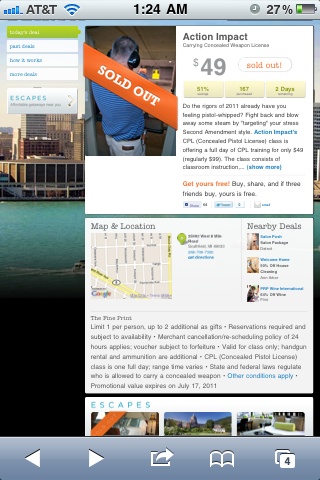