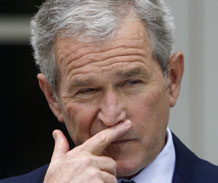 Such as the following from earlier today, December 23rd…

Sentence: June 9, 1992; District of Nebraska; four years of probation conditioned on 60 days of confinement in a jail-type institution on work release, four months of home detention and performance of 200 hours of community service.

Terms of commutation: Prison sentence to expire on Feb. 23, 2009, leaving intact and in effect the 10-year term of supervised release with all its conditions.

Lastly, this one is a pretty interesting pardon from today though not drug related…

Offense: Conspiracy to export, and exportation, of a military aircraft to a foreign country in violation of the Neutrality Act of 1939; 22 U.S.C. § 448(a).

Maybe all Presidents pardon and/or commute sentences for a lot of people with drug related convictions.  Who can forget about the pardoning of Roger Clinton, Jr.?