It turns out the Craiglist Chicago ad originally seen on BccList.com here is a pretty weird campaign/scam.  I’m not sure what kind of campaign/scam they’re going for but it’s weird.

After I posted the original blog posting, I sent them the link.  The response back from jessiesaqt@yahoo.com was, “Did you think you were going to get some fake response?  Why did you put that up?”

I responded, “no – I just think it’s an awesome deal.  $550 a month in lakeview is great.  hopefully you found a roommate.”

The autoresponse back from the two little “vixens” was the following…

“Thanks for responding to our room mate ad. As you probably guessed, the response has been insane! The house is available as of now, and it is as nice as it looks, with a garage and pool available. To make it easy, we set up a page wiht info on how you can get yourself moving in the room mate process weneedaroommate.blogspot.com. It has some more info on the house and pics of us! Check it out, and get back with us when you have what the landlord needs!”

I wouldn’t go to the above link.  The pictures aren’t overly provocative but a) some are not safe for work and b) I’m not sure where the site redirects you if you start clicking on pictures.

But, I went to their blogspot posting and a 1) there are no houses like what’s shown in Lakeview and b) the girls & inside of the house are different from the original posting.  See screenshots below.

Booooo – fake ad on Craigslist…imagine that. 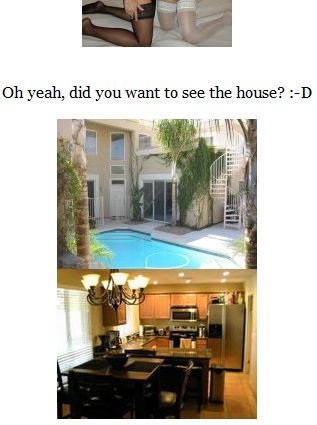