While this posting is like 12 hours overdue, there is nothing more lame than the “sport” of Water Polo. Seriously.

There is an offensive penalty every other “play.”

The headgear – as seen below – is ridiculous. Moreover, the shift changes are equally as stupid. It’s hard to explain why guys jumping in a pool is so annoying – maybe it’s the headgear.

The announcers – grown men – say things like “he attempted a bunny ear shot.”

The only requirement is that the player must be strong and able to tread water. That’s it.

Everybody good played for Stanford. 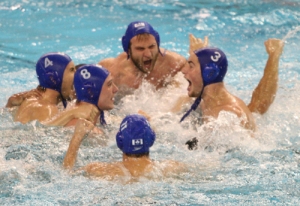 If you were unfortunate enough to catch the US Men’s team vs. China, feel free to comment with anything I may have missed.